For nearly 400 years history has chosen to forget the part that Newlyn in Cornwall played in the epic journey of the Mayflower. For far too long people have been under the misguided beliefs that the Mayflower’s last port of call in England was Plymouth and the landing point in America was Plymouth rock. This site intends to not only make people aware of the facts but also to support events to celebrate the Mayflower’s journey from Newlyn Cornwall England to Cornwall ( now Corn Hill) Truro, Cape Cod America

The history of the Mayflower can start back as far as you choose to go but for clarity I will take you back to the year 1536 and the reign of King Henry VIII with the dissolution of the monasteries. England had broken away from the Church of Rome and had created the Church of England and great peril faced anyone who chose to disagree with the King.

Following the King’s death the throne eventually fell to Bloody Queen Mary. She reversed everything and those persecuted for following the Church of Rome were once again free to do so, and those who continued to worship in the Church of England faced death. 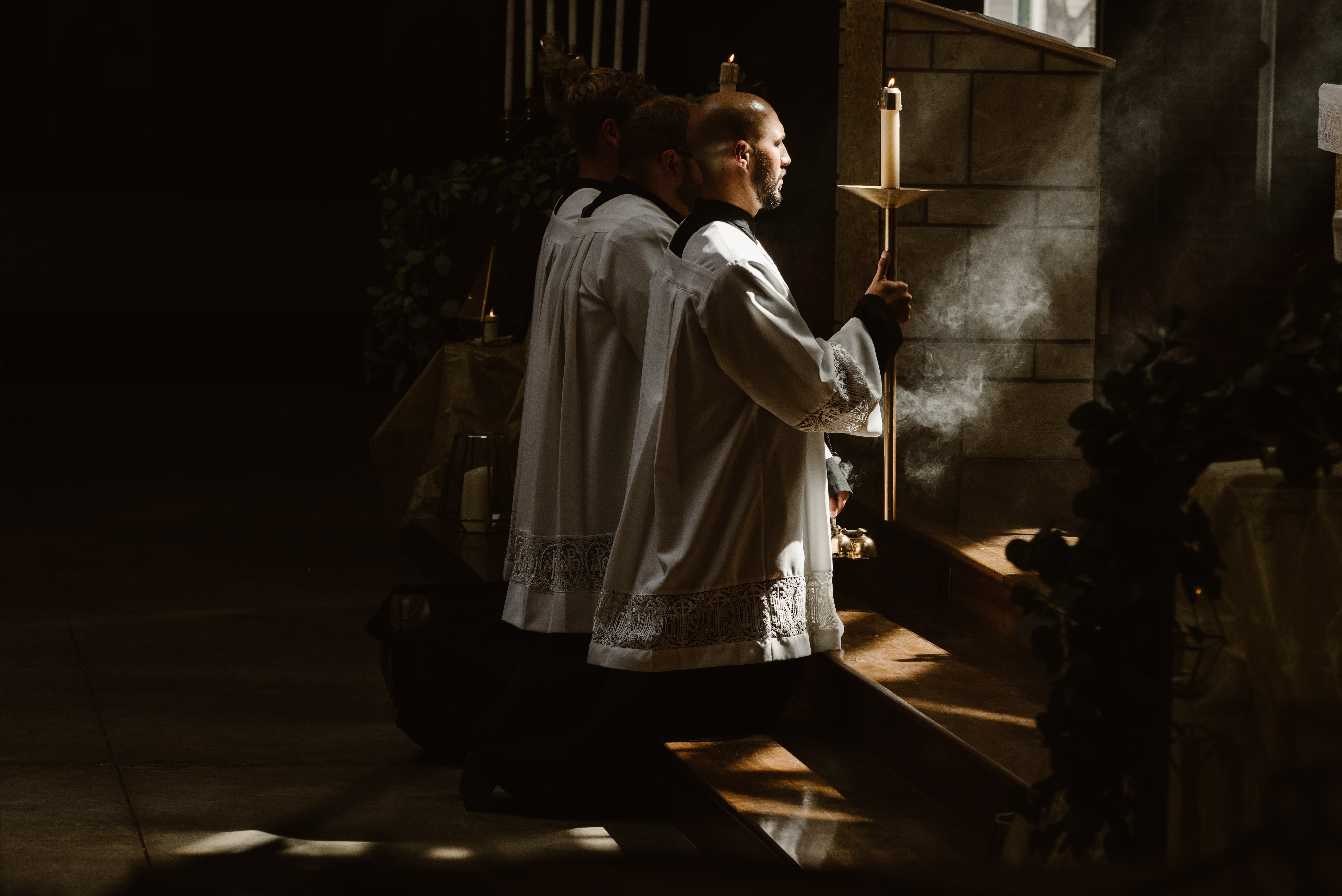 Mary’s bloody reign was followed by Queen Elizabeth I who maintained the strict condemnation of any other religious beliefs other than the Church of Rome. During Queen Elizabeth’s reign many sea voyages were undertaken and Sir Walter Raleigh made numerous trips to Virginia in America, an area named after the virgin Queen Elizabeth. Whole townships were built and English trading companies established.  Following Christopher Columbus’ discovery of America in 1492, the Italians had many interests in the country as did several other countries including Spain.

In 1603 with the death of Queen Elizabeth everything was to change yet again. James I of England and VI of Scotland came to the throne. James introduced a law making it a criminal offence not to worship in a Church of England and outlawed the Church of Rome. The religious dictatorship and persecution at the whim of a monarch was once again causing unrest and acts of rebellion. One such Catholic rebel was Guy Fawkes, who totally lost the plot on Saturday 5th November 1605. When James introduced the authorised version of the bible into church services it was a step too far as many people regarded the new bible as a polluted version of the truth. They vowed to follow what they regarded as the pure bible and became known as the Puritans.

Small groups of Puritans gathered and from the Nottinghamshire village of Scrooby and Boston in Lincolnshire they gained in strength. The group called themselves Saints. In an attempt to escape religious restrictions they moved as a group to Leiden in the Netherlands, but found further unwanted interference with their beliefs and way of life and so returned to England. James was growing tired of the unrest the Saints were causing and agreed to allow them to leave the country and settle in the long established English colony of Virginia America.

Sailing out of Southampton

The Saints raised the funds for their journey and chartered two ships for the crossing, the Speedwell and the Mayflower. On 15th August 1620 both ships set sail for Virginia sailing out of Southampton with the intention of Virginia being their next and final destination. However problems developed with the Speedwell and both vessels were forced to return to a convenient port. Unexpectedly they docked in Plymouth Devon for repairs.

They had no connection with Plymouth. They also had very limited funds and owing to the docking fees and repair costs they were forced to sell many much needed items and left as soon as possible. It is for this reason that there is grave doubt as to whether or not Mayflower actually came in to Plymouth. There was an outbreak of cholera sweeping through the city and it would have made no sense to incur extra docking and lodging costs whilst running the risk of infection. With hastily patched up repairs the Speedwell left Plymouth and joined Mayflower who was probably waiting at anchor and set sail once again.

To this day there are steps at Plymouth known as  Mayflower Steps, but it is a certainty that no one connected to the Mayflower ever trod these steps, as their very existence was not to come about until 1934, three hundred and fourteen years after the Speedwell left Plymouth.

An unexpected stop at Newlyn

With the unscheduled stopover at Plymouth behind them the two ships once again headed for open waters, but it became obvious that Speedwell was not seaworthy and could not make the crossing. It was once again taking on water. The decision was made to abandon Speedwell and transfer passengers and cargo from Speedwell to Mayflower. The two ships then parted company. Within a very short while it became apparent that Mayflower was overloaded and cargo adjustments had to be made. Thankfully the Cornish port of Newlyn lay ahead and was one of the very last possible chances they had to make Mayflower safe for the crossing. It was in the safety of the old quay at Newlyn where the cargo adjustments were made and fresh water taken on.

Because of the approaching winter conditions it was decided not to delay the journey any longer. This unscheduled stop makes Newlyn Old Quay the very last port of call for Mayflower and the official final departure point from England to America for that historic and epic journey. 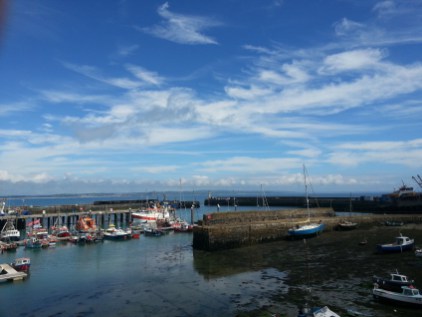 Mayflower was now under sail. The pilgrims believed that Mayflower was heading for the British colony of Virginia  carrying 102 passengers made up of what they themselves called Saints and Strangers. Their intention being to follow in the footsteps of a well navigated passage that had been sailed for 128 years by thousands of ships before them. However all was not plain sailing, and during the journey that was to last sixty six days, two of the passengers died whilst others took sick. There was one birth, a boy named Oceanus Hopkins.

Arrival in the New World

The captain of Mayflower was Christopher Jones, a buccaneer pirate who would do anything for money. It is commonly believed that the Dutch government wanted to establish a foothold in America and as many of the pilgrims were Dutch they paid Captain Jones to betray the agreement with the English crown and land them away from British territory. They were never going to Virginia. It is for this reason that Captain Jones took the decision not to keep a ships log and so a true record of the crossing never existed. Mayflower sighted land on the 9th November 1620.They were in an area known today as Cape Cod America. It took them eighteen days before they felt ready for a party to leave the safety of Mayflower. On the 27th November an exploratory group walked for their first time on American soil naming it in honour of the whole of Cornwall, in grateful thanks for the help the people of Newlyn gave them in sending them safely on their way from England to America. They named the place Cornwall Truro and today, owing to a mixture of mispronunciation, bad spelling and illegible handwriting, the town is now known as Corn Hill Truro. Truro being the cathedral city of the county of Cornwall in England.

It quickly became apparent that Cornwall Truro was not the safest of places for them following a fall out with local Indians. It was decided to sail across the bay to a more welcoming place to disembark and came across the place known today as Plymouth. It is extremely dubious that the claims, that a lump of granite now known as Plymouth rock, is the actual place of disembarkment from the Mayflower as there is no mention of it at all at the time. It was not until 1741, 121 years after the arrival of the Mayflower that it is mentioned.

A common misunderstanding is that the Plymouth brethren boarded the Mayflower in Plymouth England. This is simply not the case. The Plymouth Brethren is an Irish movement based in Dublin and was not established until the 1820’s. That is 200 years after Mayflower sailed.

The Mayflower Compact & The Founding Fathers

Yet another frequent misconception is the belief that the Mayflower Saints were the Founding Fathers of the United States of America. The facts are that a document, known as the Mayflower Compact believed to be the first governing document to establish civil order was drawn up, signed and witnessed aboard the Mayflower whilst it weigh anchor just off what is now North Truro. The terms set out in the document were then first implemented in what became the Plymouth Colony. The original document was lost and a replacement was drawn up. However nobody can be sure just how accurate the replacement document was. It was not until the 1770’s, some 150 years later, that the Founding Fathers drew up a document that superseded the Mayflower Compact.

The work of Bill Best Harris

We owe a huge debt of gratitude to Mr. Bill Best Harris, for his painstaking research showing the part that Newlyn played in being the very last port of call for the Mayflower. Bill Best Harris was the world leading expert and custodian of Plymouths historic archives 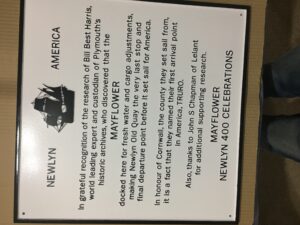 The Mayflower was given consent by James I to land in Virginia and although they were betrayed and delivered to Truro America to mark the intended destination there is an area of West Virginia named Newlyn in honour of the departure point of the Mayflower from England. It is also worth noting that located approximately 100 miles from the present Corn Hill Truro is the city of Boston Massachusetts named in honour of the Saints from Boston Lincolnshire.

It should also be remembered that William Bradford who helped write the Mayflower compact and later became governor of Plymouth Colony did write an account of the Mayflower’s journey. However unfortunately he did not write this at the time. These writings that can still be seen today are the memories of an old man shortly before his death. Although they are helpful they can never give a full picture. William Bradford even barely gives mention to the tragic death by drowning of his wife. Sadly but not surprisingly there are gaps that will probably remain lost in the history of time.

Mayflower has become a multimillion pound business causing massive investments to be made. It is therefore unsurprising that history has been rewritten to promote this investment. This document contains what is believed to be the facts and although not all history can ever be proven I hope that its contents show that certain documents claiming to be facts together with some common beliefs can with certainty be shown to be false.